History of PBI in Guatemala 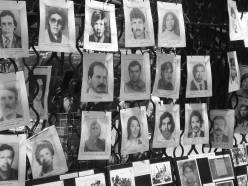 PBI arrived in Guatemala in 1983.  The country had experienced 20 years of violent internal conflict and the military had recently concluded the application of a scorched earth strategy.  The social movement had been devastated and did not have political or social space in which to work.  The repression, impunity, the lack of justice and opportunities were the order of the day.  International presence was nearly non-existent and the government was losing external support.  From the exchanges at San Jose and Esquipulas, a process of building civilian governments (1986) began, but always underneath the shade of the Army.  The popular movement began to flourish with many difficulties and the national and international communities slowly pushed towards a peace process.

Between 1986 and 1996 (the signing of the Peace Accords), Guatemala also lived the end of the Cold War and the progressive weight of Neo-liberalism as the dominant economic system.  Slowly, the threats, assassinations and disappearances diminished.  The capacity for organization and communication within Guatemalan society continued to develop, and social and political spaces for action opened.  The action of the Guatemalan elites benefited from this opening, moderate sectors of the military, the press, the Church, the guerilla, the popular movement and the international community, for distinct reasons and interests, all acted in order to create a distinct and/or reformed country.  It was the time in which there was interest from the international community for the country (Nobel Prize…), the development of cooperation programs, of the returning of the refugees and the growth of the NGOs and accompaniment organizations.

PBI, from the beginning of its work, had a vision of supporting and protecting the social movement and to distribute information about Guatemala to the exterior. Always based in the criteria of non-partisanship and non-violence, PBI was the first presence of international organizations in Guatemala that brought a message of peace.  Reflecting the changing situation and the capacities of local institutions, PBI adopted different forms of accompaniment (to open spaces, as escorts, as links, in the occupation of buildings, in popular protests, in the processes of the returning of refugees…).  The accompaniment of processes was emphasized, for example being present when many organizations were formed (GAM, CPR, CONAVIGUA…) and the opening of space for their work, the process of the refugees returning, or in the mobilization of the social movement.

After the Peace Accords were signed, external financial support proliferated within the country, the gradual decrease of human rights violations continued and several tables of political negotiation were established with the participation of the civil society.  PBI focused its work on investigation and divulgation of information due to the decreasing number of petitions for accompaniment and in support of the new process of peace.  Finally, after a long process of analysis and evaluation, PBI decided to close the Project in 1999.

In order to make this decision effectively, the demands of the social movement, the capacity for dissuasion, the existing risks of maintaining a presence and the slowly growing spaces for Guatemalan society to act.  It became clear that the peace process was irreversible (although long and frustrating), and it was decided that PBI would maintain connected with Guatemala through analysis of weaknesses of the peace process, and the recognition of the power and the existence of the structures that originated from the counterinsurgency.

When the human rights situation began to deteriorate significantly with the Republican Front of Guatemala (FRG) taking power in 2000, PBI received petitions and communication from diverse Guatemalan organizations asking us to return to Guatemala.  In response, PBI organized a delegation to explore the situation in 2001.  After which and with the information from the report of the delegation, an Exploratory Project Committee (PEC) was formed, and resulted in a permanent presence in Guatemala in 2002 with an in-country team formally being opened in April 2003.

PBI, as it has grown and gained experience, it has developed more efficient and complex forms of creating dissuasion whether it in its ability to analyze the political situation, the creation of support networks, the distribution of information, its organizational structure or the training process.  However, these evolving forms of how PBI has functioned have always been cross-cutting and foundational elements of PBI’s work and have contributed to the uniqueness of the organization.