The Resistance is a collective process that began around 2015, when they held their first assembly, with the participation of 38 communities of the municipality of Cahabón. These communities organized themselves for the defense of the territory. The Q'eqchi 'Maya people, more than ten centuries ago, settled in what are now the municipalities of Cobán, Chamelco, Carchá, Lankín, Cahabón, Tucurú and Senahú. The settlements were built alongside the rivers of the area. The Cahabón river basin covers 14 municipalities and 3 departments, and a total area of 245,900 hectares.

On the Cahabón River and its tributaries Oxec, Canlich and Chiacté, seven hydroelectric plants currently operate: Renace I, II, III, IV, Oxec, Oxec II, and Chichaic. The construction of several dams along the river seriously disrupts the fluvial ecosystem, destroying habitats, modifying the flow and changing the basic parameters of water, such as temperature or the degree of oxygenation. Due to this problem, the Resistance of Cahabón carried out a good-faith consultation on August 27, 2017, in which 26,537 people participated. 26,526 rejected the presence of the company (19,714 adults, 8,700 minors) and 11 people voted in favour. PBI has accompanied the Resistance since July 2017. During the good-faith consultation PBI accompanied the consultation process relating to the hydroelectric project installed on the Cahabón river basin, operated by OXEC SA, belonging to the Energy Resources Capital Corp group (ERCC). Currently, linked to the Resistance, local authorities and Community Development Councils (COCODES) of 195 communities, are demanding the revocation of the licenses granted to the OXEC company, for having been acquired without holding a consultation in good faith, in accordance with provisions outlined in ILO Convention 169.

In its May 2017 ruling, the Constitutional Court itself recognized this as a violation of the Q’eqchi people's right to consultation. The court did not, however, suspend the activities of the hydroelectric plant, but rather, ordered for a community consultation to be held.

Bernardo Caal Xol, leader of the Resistance, has suffered a serious process of defamation, criminalization and judicialization, which led to the highly controversial sentence, handed down by a Cobán court in November 2018, which sentenced him to 7 years and 4 months for the alleged crimes of illegal detention and aggravated robbery. The sentence has not been finalised. Bernardo Caal Xol has been in prison since January 2018, as he spent several months in preventive detention before his conviction.

Representatives of the United Nations consider the legal process against Bernardo Caal Xol as a case clear of criminalization. "The condemnation of the Q'eqchí' leader is an apparent attempt to silence and discredit the legitimate exercise of the rights of the indigenous community," said the experts. "This is not an isolated case; there are numerous members of indigenous communities who are being criminalized in Guatemala for defending their traditional lands and resources against large-scale development projects that cause environmental damage. We insist that criminal investigations must be independent and impartial."

The human rights defender and teacher Bernardo Caal Xol was released from prison on March 24, following four years and two months of "torture", due to good behaviour. It is important to note that regarding this process there is still an appeal to the Constitutional Court (CC) pending, which in which they allege violations of human rights throughout the entire criminal process. In addition, there is another case against Bernardo, known as the "teacher case", still pending which has been taken by the Ministry of Education.

PBI accompanies the Peaceful Resistance of Cahabón since July of 2017.

On our ACÉRCATE program in March, Bernardo spoke about his struggle to the defend the Cahabón river and the criminalización aginst him, among others (with English subtitles) 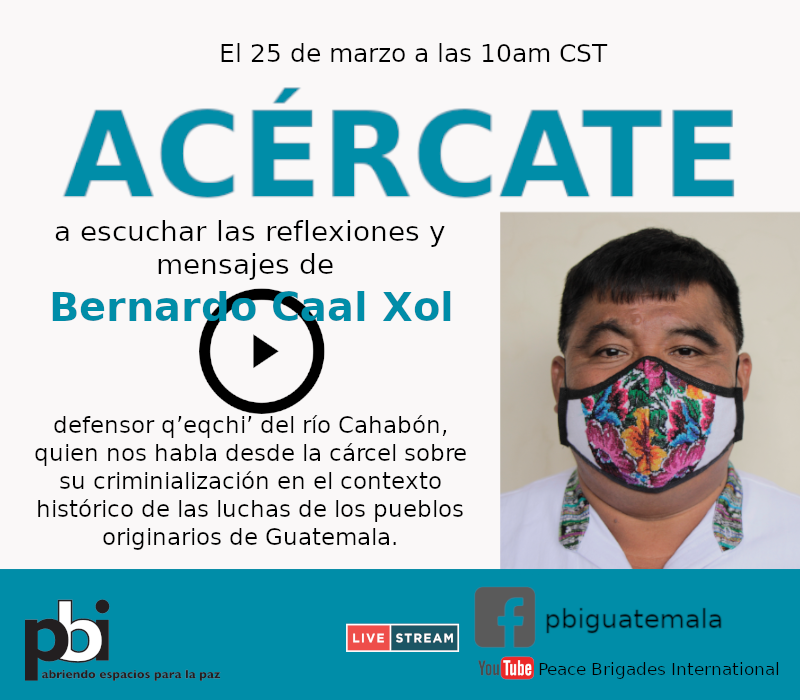