The Covid-19 pandemic was declared in March 2020. As a measure to contain the spread of the virus we were all confined to our homes and had to adapt our work to the virtual format. We carried out our work under these new circumstances for seven months. One of the last face-to-face activities we organised before the country closed was the presentation of the documentary La Sangre de la Tierra (The Blood of the Earth) (2020, Director: Felix Zurita), produced by PBI Spain and Entrepueblos, in Guatemala City.

La Sangre de la Tierra tells the story of resistances to hydroelectric projects by three indigenous peoples’ across Mexico, Honduras and Guatemala. The section which covers Guatemala was filmed in April 2019 in the Q'eqchi' territory of Cahabón with members of the Peaceful Resistance, Cahabón. It also included an interview in Coban prison with Bernardo Caal Xol, leader of the resistance and a criminalized and imprisoned human rights defender. We had planned a return trip to the region for April 2020 to screen the documentary and present the result of this audiovisual project back to the communities and people of the resistance. The trip had to be suspended, however, due to the circumstances imposed by the pandemic.

During the second half of 2020 we resumed part of our work in person, carrying out some accompaniment in the capital city. As of January 2021 we began traveling to the capitals of the departments where we had accompaniment projects and we began to physically meet once more with the people and organizations we accompanied, with due regard to the necessary biosecurity measures. We finally resumed visits to the communities and workshops during the first semester of 2022. This was the moment when we decided to resume our plan to present the documentary in the place it was filmed, Cahabón. This coincided with the wonderful news of the release of Bernardo Caal Xol. This did not occur because the judicial system had recognized his criminalization as false, but because he was granted a remission in his sentence, as provided by law, having served more than half of his sentence and having behaved excellently. 1

Thus, from April 30 to May 8, we traveled to several communities in the municipality to screen the documentary along with another documentary, produced by the Madre Selva Collective, on the history of the Resistance: Agua - Sangre de la Tierra (Water – Blood ot the Earth, 2020). Each screening was introduced with a message from Bernardo to his Q'eqchis' brothers and sisters. The communities we visited included Rumpoc, Chajbelén, Las Tres Cruces, Setzacpec, Gualibaj, Sepoc, Sepos, La Cresta, Sesaltul and San Cristobal Sactá. Some 2,000 people attended the screening and saw themselves in their own history of resistance and defense of the Cahabón and Oxec rivers. The screenings took place in community halls, churches and homes and were filled with people of all ages, who were visibly interested and excited, especially when they saw Bernardo explaining, from jail, why he was fighting for the rivers. The joy expressed was widespread, as were the words of thanks and applause at the end of the event. We are deeply grateful for the affection and warmth with which we were welcomed during this unforgettable week spent with the communities of the Peaceful Resistance of Cahabón. 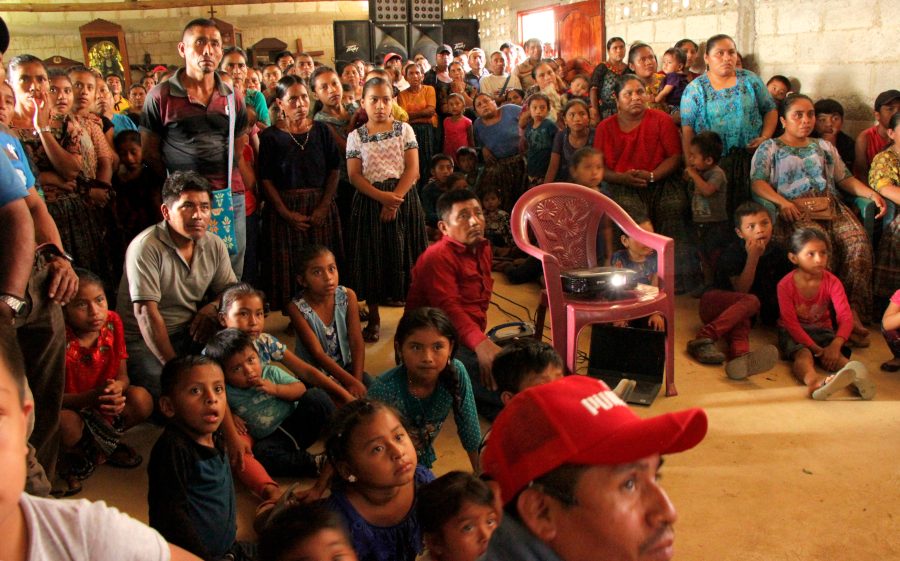 1 Nevertheless the criminalization of Bernardo continues. He is currently awaiting trial on an accusation by the Ministry of Education against him in what is known as the "Teacher Case."