Article 1: The objective of the present law is to guarantee the respect, recognition, conservation and protection of the ancestral indigenous and peasant knowledge and practices, as well as the biological diversity in their territories, their ecological balance and conviviality with the indivisuals, peoples, indigenous and peasant communities.

Guatemala - Iximulew in Mayan languages - is one of 21 mega-diverse countries in the world and is considered one of the eight centers of origin for biodiversity in the world. Between 13 and 15% of the species of mammals, reptiles, amphibians, birds and plants present in the country are endemic.1 In order to protect this natural wealth, which is threatened by diverse economic activities, hundreds of ancestral authorities and indigenous and peasant organizations presented the Biodiversity and Ancestral Knowledge bill, known as the Peoples' Law, on May 31. The law was delivered to several deputies of the Congress of the Republic, who pledged to take the initiative (registration number 6086) through the legislative process. During this activity we spoke with several people accompanied by PBI and with an ancestral authority. They shared their assessments of the proposal, as well as the work to be done, with us.

Paulina del Carmen González Navichoc, an ancestral authority from San Pedro La Laguna, Sololá, was one of the indigenous authorities present. She shared her motivation with us: "It’s very important for us to protect biodiversity and our seeds. We know that sometimes Mother Earth sprouts by herself without the need to plant, without the need for chemical fertilizers. Whereas if GMO varieties come, they are only going to produce one seed a year, if it goes well. We would have to buy fertilizers, we would have to buy seeds every time we want to plant. They don't taste the same either, because they have definitely been modified. We can tell when we buy corn or the sheaves used to make tortillas; they taste like plastic when they are toasted, they don’t taste like ours, which come out toasty and crunchy. That is why we want to defend our biodiversity. We don’t want them to give us seeds from other places that do not benefit us, on the contrary, they make us sick, because our organism is adapted to what is ours, to what is native.” 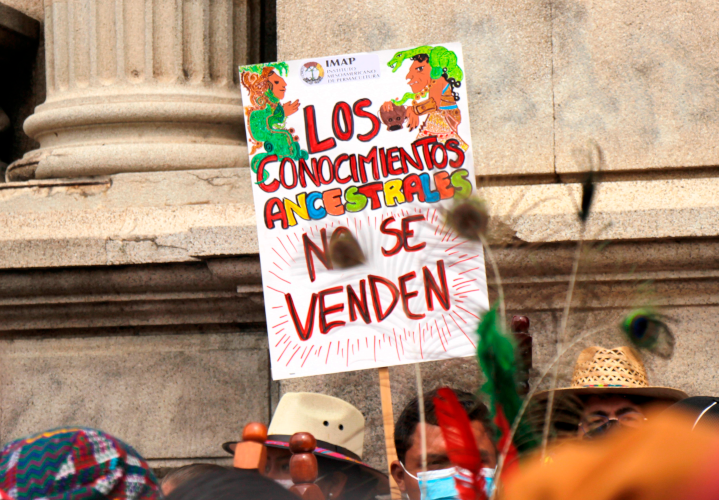 "As communities we join this initiative, because it comes from the people".

Abelino Mejía, a member of the Community Council of Champerico (CCC) and a human rights defender who has been criminalized due to his struggle for water in the South Coast, told us that the CCC were involved in local and regional assemblies from the beginning: "the proposal came from all the communities, because of the diversion of rivers, the erosion, the terrible pollution that exists in our region...."

The CCC is part of the National Food Sovereignty Network of Guatemala, who for five years have been facilitating a series of meetings between ancestral authorities from the different territories across the country, community leaders and representatives of indigenous and peasant organizations. These spaces led to joint reflections and analysis on the challenges encountered in the course of taking actions to protect and conserve Mother Earth, seeds and ancestral knowledge.

The participants agreed to form the Alliance of Authorities for the Defense of Biodiversity to protect "the practices, knowledge, know-how and biological diversity with which we have coexisted in a balanced way over many centuries." 2 With legal advice from the Indigenous Peoples Law Firm, and other experts and academics, they developed an initiative, grounded in the cosmovision of Indigenous Peoples and peasants that is based on harmony, respect, conversation and connection "with all forms of life on Mother Earth and the Cosmos." 3

The proposed law reaffirms the rights and power of native peoples, indigenous and peasant communities, to decide on their own collective knowledge systems, as well as to manage the biological diversity in their territories. 4

GMOs and fertilizers versus biodiversity and ancestral wisdom.

During the activity at the Congress we also met José Angel Llamas, from the Peaceful Resistance, La Puya, who have been resisting a mining project, currently suspended, since 2010. La Puya support this bill, because the defense of biodiversity and ancestral knowledge is also at the heart of their struggle: "We defend water, we defend life. Without water we have no crops, and if we have no crops there is no life, that’s why it’s necessary to take care of water and defend the right we have to the non-privatization of our seeds. [In Congress] they continue to pass laws in which they privatize seeds, and they are going to make us sow those varieties, and not our native seeds, which are the ones that not only have more nutrients, but are more adapted to our territory. In introducing GMOs, unfortunately, they forced us to use chemical fertilizers, because of the publicity and promotion in government programs and how well the companies presented them. But any product that is developed through organic fertilizers is much healthier than those that grow with the help of chemical fertilizers."

The indigenous mayoress of San Pedro La Laguna highlights the damage caused by chemical fertilizers: "since the fertilizer has been introduced, it has damaged Mother Earth, because it sterilizes it. In the same way, when it rains all this runs into the rivers and lakes causing pollution. Let us remember that water is life for us, and polluted water definitely affects us. Lake Atitlán is very polluted and the biggest problem is that several of the communities living in the basin drink from that water, so this is affecting us. It is sad that our [state] authorities, are trying to commercialize the water instead of doing something for us as native inhabitants.”

Furthermore, the protection of native seeds has another dimension for Guatemala’s indigenous peoples, as Paulina del Carmen González Navichoc explains: "seeds have medicinal properties, for example, if someone has a conflict and comes to us, the ancestral authorities, we give them yellow corn to take in their hands and they calm down, they can ease their nerves and speak spontaneously. On the other hand, the white corn is to avoid diabetes, which is a disease that is very prevalent now; you have to drink it like a soft drink, the meal is mixed with water, without flavoring or anything, without sweetening it, that’s how it cures; and the black corn is an antioxidant, just like the red corn." 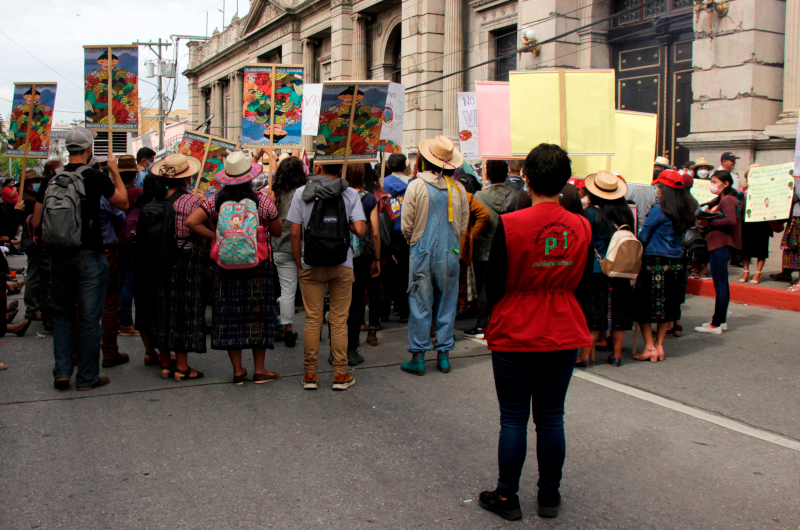 When asked what the next steps are, Abelino Mejía, who is also part of REDSAG's political council, warns that "although the bill has already been presented, our work lobbying in Congress and meeting with more congressmen will continue. We will also raise more awareness about the law more so that people really know about it and can unite behind it. I believe that the time will come when all sectors will unite: students, peasants, workers, from different unions... because the poor social class has been, and is, very exploited in this country. So, that is the work, it’s a huge challenge. We are going to continue growing in numbers because what we are talking about here has to grow."

Confronting a congress which has demonstrated itself to be against the interests of the people, the Alliance of Authorities for the Defense of Biodiversity has proposed that rather than waiting for the law to be approved, they should introduce it immediately in the indigenous and peasant communities. The way forward for the ancestral authorities is "to raise awareness through the media, such as community radio stations, to use them to raise awareness among our people. In fact, many are already aware, and we have to ask them not to bring GMOs to our communities, because in the long run it affects us all. The problem is when there is no information based on the truth."

Abelino Mejía sees an openness among the communities of the South Coast to learning about the initiative: "we see the initiative as very good because of the great need caused by the scarcity of water in the communities of Champerico, and because it takes into account the water needed for food. Yes, we have had many scares and many protests due to the lack of water, and more people and associations are joining us to learn about this law initiative."

Finally we met José Bo, a member of the Peaceful Resistance, Cahabón who are resisting three hydroelectric projects. He traveled to the capital for three days to be present at the activity: "We are used to eating a diversity of corn and other native foods. We do not want them to be taken away from us. What we must do is unite to defend our food and our native crops, that is why I come all the way to Guatemala to support our compañeros and compañeras.”