The impact of COVID-19 in communities accompanied by PBI

The first cases of COVID-19, detected in Wuhan, China, were reported to the World Health Organization (WHO) on December 31, 2019 and, on March 11, 2020, the WHO declared a pandemic. This situation has posed a great challenge for countries and governments around the world, who have had to react quickly to minimize contagions, avoid the collapse of health systems and cushion the economic crisis which, once again, is being experienced with particular force by por and vulnerable populations.

The first known case of COVID-19 in Guatemala was reported by the President of the Republic, Alejandro Giammattei, on March 13, 2020, but measures to contain the pandemic had already been in place since the previous week. A State of Public Calamity was decreed, which translated into limits on the rights to freedom of movement and assembly, as well as the establishment of minimum and maximum prices for products necessary for the prevention, treatment, containment and response to COVID-19.1 A couple of weeks later the government instituted border closures and a imposed curfew between 4 pm and 4 am.2

In parallel with the government measures, communities took the initiative to protect themselves by establishing their own prevention measures,3 which contributed to the very slow spread of the pandemic throughout 2020. With the opening of the country and the lifting of restrictions from September onwards, However, the rate of infection began to accelerate and the pandemic spread throughout the country.4

Since the beginning of the pandemic, several governmental decrees have established various restrictions in an attempt to halt the advance of the virus. The consequences of the pandemic and the government's management of the crisis are considered extremely serious by different sectors of civil society, especially for the most impoverished communities and populations. According to Lesly Ramirez of the Center for Equity and Governance Studies (CEGSS), the government's measures were of little relevance in addressing the outbreak and have demonstrated a tremendous lack of consideration for the rural population. 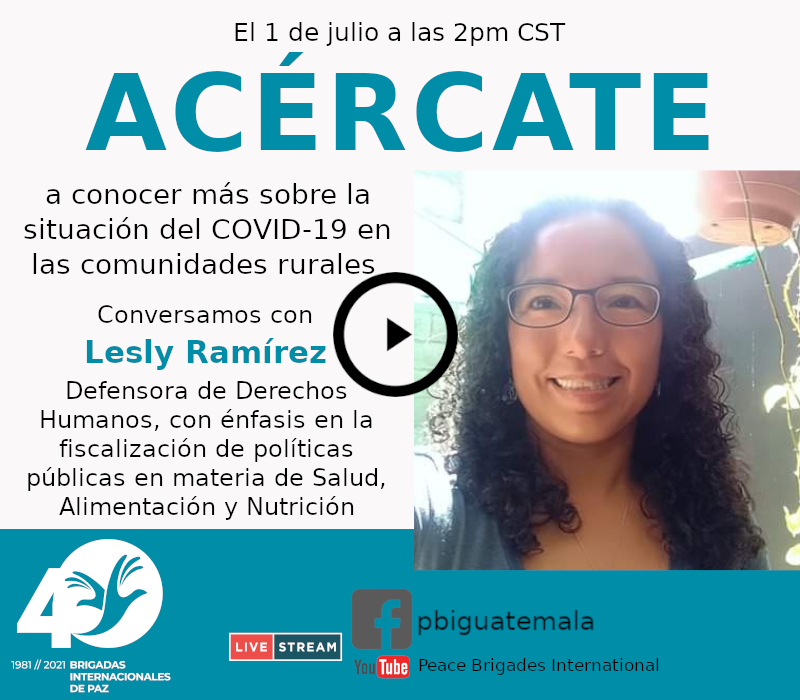 Urgent need for an efficient awareness raising and informational campaign

To address a situation the magnitude of a pandemic, it is key that information reaches the entire population in a prompt and clear manner. The Guatemalan Ministry of Public Health and Social Assistance (MSPAS) has. assured that information about COVID-19 has been reaching the population through awareness raising campaigns. 5 Lesly Ramirez, however, has denounced that there is no communication strategy that provides adequate information, neither about the disease nor about the vaccines. In a study carried out in December 2020 by CEGSS and the Network of Defenders of the Right to Health (REDCSALUD), based on a sample of health services in five departments (Sololá, Totonicapán, Huehuetenango, Quiché and Alta Verapaz), only 39% of the population consulted stated that they had seen or heard messages from official information campaigns on the prevention and protection of COVID-19. 6

There are serious doubts as to whether the measures applied in rural areas have taken into account the specific needs of these regions.7 The government has made use of state security forces to control the application of the restrictions imposed, with roadblocks, patrols and visits by armed forces to rural communities. People from communities in various regions of the country accompanied by PBI have described how the states of siege and curfews have had an extreme impact on the elderly population, as they have revived the memory of trauma experienced during the Internal Armed Conflict: "for those of us who lived through the war, it awakens that fear again. People were more afraid of the curfew than of the disease."

Regarding the vaccination roll out, critics have noted how there has been no clear communication strategy for the population, which makes many people, especially in rural areas, distrustful or unwilling to get vaccinated. According to the midwife Graciela Vásquez,8 member of TZK'AT Network of Ancestral Healers of Community Feminism, there is not enough information about vaccines and their side effects, "there are no health personnel who know the local languages and who can inform people about the symptoms that may result from vaccinations: pain in the arm, tiredness, etc."

Local leaders across several departments are concerned about the lack of efficiency of the information campaigns. According to Abelino Mejía, member of the Community Council of Retalhuleu (CCR), "many have been informed through pamphlets distributed by organizations", as "most people in rural areas do not have television and most elderly people have no telephone. The little information that reaches them is from younger people who share it with them." Sandra Calel, leader of the Verapaz Union of Campesino Organizations (UVOC) in Alta Verapaz, points out that "the information arrives, but communicated in the wrong way, because they only scare people rather than telling them how to cure or prevent the illness. Also, the conditions necessary for complying with the measures they have demanded do not exist in the communities." Based on his experience, he noted that "information to the communities only comes through the Community Development Councils (COCODES). While there may be information available in the media, it often does not reach the communities. And with respect to information shared through radio, there is not always a radio signal in the communities." This lack of culturally appropriate information from the state, available in local languages, does not help in spreading an understanding of the importance of adopting protection measures. It also facilitates the spread of all kinds of hoaxes about the virus, thus discouraging the diagnosis of the disease and encouraging the omission of positive cases, all of which favors the further spread of the pandemic. 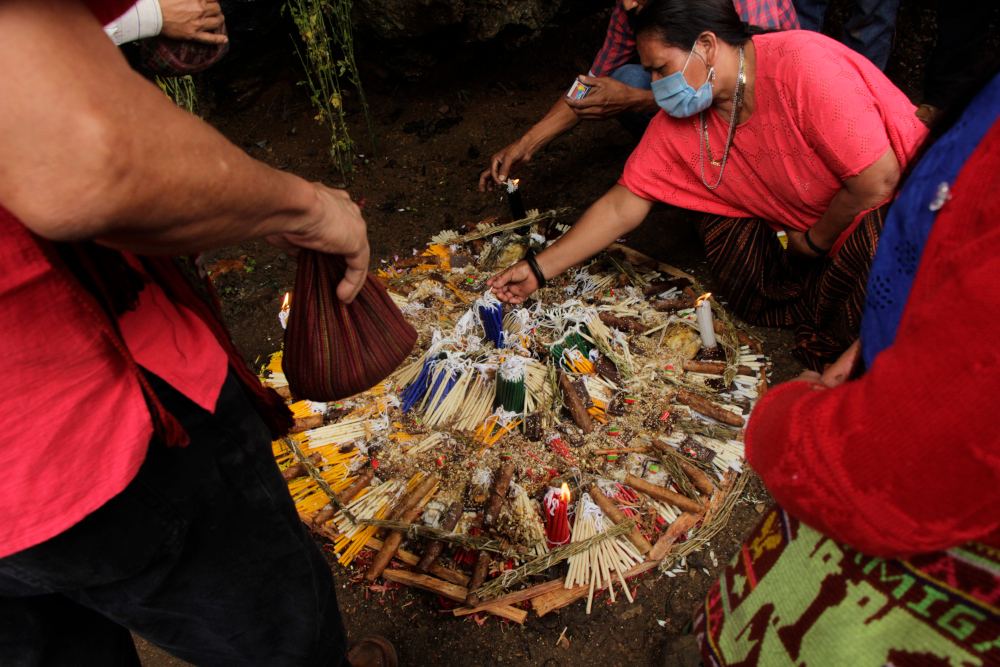 There is a generalized lack of strategy which is also having considerable impact on health services which were already weak before the pandemic. Nevertheless, the pandemic has caused a further drastic deterioration in services.9 At the end of March 2020, according to the report mentioned in the previous section, most of the health services analyzed were functioning relatively normally. As the pandemic progressed, however, limitations in access to medical care began to be registered, as well as a lack of protective equipment, biosecurity protocols and training for professionals. In addition, hurricane Eta and storm Iota which hit the region in November 2020, led to 60 deaths as well as the loss of homes, crops and roads, and the already precarious health infrastructure was also seriously affected. So far, there has been no plan for the reconstruction of this infrastructure and the population has denounced the almost total absence of the State.10

As for the increases in deaths, there are other causes that have increased mortality aside from COVID-19. The precariousness of health centers and hospitals, mobility restrictions and the reduced flow of public transportation, as well as the curfew, prevented many patients who Pandemic, institutional weakness, a precarious health system and worsening poverty

As for the increases in deaths, there are other causes that have increased mortality aside from COVID-19. The precariousness of health centers and hospitals, mobility restrictions and the reduced flow of public transportation, as well as the curfew, prevented many patients who needed, for example, to undergo dialysis, from being able to access to these services. It is estimated that around 400-500 patients with kidney failure died silently because they were not able to access care in the rural disease units. According to Lesly Ramirez, hospital outpatient clinics have been closed for a year and a half, so many of these patients may have died.

With respect to acute malnutrition, a significant increase has been evident since 2019, particularly among the population of the Dry Corridor.11 The pandemic exacerbated this trend and the rate of chronic malnutrition in Guatemala has become the highest in Latin America and one of the highest in the world (49%), reaching very alarming levels in some rural areas, such as those located in the department of Chiquimula (80%).

"The generalized measures dictated by the government for the entire country within the framework of the pandemic have had diverse impacts and repercussions on the lives of people, on community dynamics (loss of employment and marketing channels, greater food insecurity, greater difficulties in mobilizing in the face of emergencies) and on the provision of health services." CEGSS y REDCSALUD, Informe de monitoreo

Trade and the local economy have been severely damaged. Graciela Vásquez points out that there has been "an excessive increase in the price of transportation, both private and public, and that this has prevented many people in rural communities from being able to travel to sell their products. According to Abelino Mejía, a criminalized human rights defender from the South Coast, by the end of 2020 there was evidence of increased labor precarity: "people were fired and those who remained had to take on more tasks".

Once again it has become clear that when there is a crisis, women are particularly affected, as they often face situations of greater vulnerability and the measures adopted to fight the pandemic have had a specific impact on them. Graciela Vasquez describes how during lock-down there was "an increase in rapes, aggression and economic violence against women. Housework also increased because the men were always at home." According to Sandra Calel, at UVOC they are accompanying cases of single mothers and widows who have had to sell their land to be able to support their families during the pandemic, because although "women during the pandemic were producing products, they could not sell them because of the total lock-down."

Children are another population which have been deeply affected. Oscar Ical, a member of the Community Council of the Highlands (CCDA), is very concerned about children's education. On-site classes in rural schools were suspended in March 2020 and were not resumed until September 2021. For example, in her community " the teacher comes and gives one hour to each class once a week. The students are learning nothing this way. My son was moved into fourth grade and next year he will be in fifth grade without knowing how to read and write. And I don't have time to practice with him every day.”

In addition to the defenselessness of the population, especially in rural areas, the Secretary of Agrarian Affairs (SAA), an institution to which one could turn to try to solve agrarian conflicts, was shut down this year leaving an institutional vacuum. According to Sandra Calel, there has been a notable increase in the criminalization of defenders of land and territory within the context of pandemic and the absence of institutions. She questions the extension of the State of Calamity, as she feels it has favored "total corruption. We do not know where the money went." Even the Human Rights Ombudsman has stated that there is evidence and indications of the failure to implement the extraordinary budget approved by the Congress to respond to the most vulnerable populations in the face of the crisis caused by the pandemic.13 Government policies are said to be inconsistent and contradictory, since, as Abelino Mejía points out, "public transportation is limited, but the shopping malls have been given free reign, and are full of people." This deficient management by the Government has generated distrust in the communities and Lesly Ramírez points out that it has evidenced a failed State and the deep co-optation of the institutions.

So far, it is the civil society organizations who have been organizing themselves to bring information and humanitarian assistance to the communities. For this reason, organizations such as UVOC are demanding "social programs to recover the local economy and improve child nutrition." In addition, they recall the need of peasant organizations for an institution to resolve land conflicts affecting the communities. 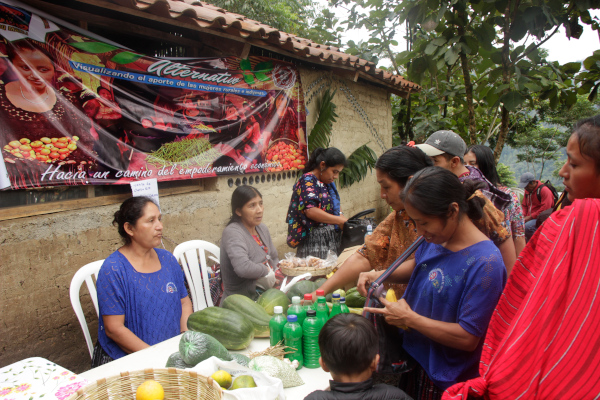 3 ACÉRCATE with Lesly Ramírez, julio 2021, at: https://pbi-guatemala.org/es/multimedia/acércate. All the quotes from Lesly Ramírez are taken from this interview.

8 The quotes from the various people that appear throughout this article were taken from interviews that PBI held between September and October 2021 with: Graciela Vásquez, Abelino Mejía, Sandra Calel and Oscar Ical.

13 The declaration of a State of Public Calamity allows the government to procure services and products without going through the oversight processes to which such actions are normally subject.